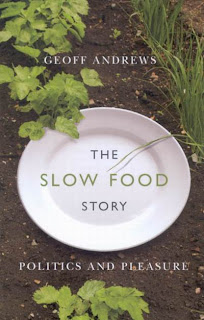 Today I plan to get hold of a new book called 'The Slow Food Story: Politics and Pleasure' written by Geoff Andrews. As a writer for Open Democracy and tutor at the Open University, Geoff has followed contemporary Italian politics for years. In this book, Geoff looks at how The Slow Food Movement, which started as a local initiative in Italy to counter fast food production twenty years ago, has become a global phenomenon with over 80,000 members in more than 100 countries. According to Geoff, The Slow Food Movement is 'one of the most significant global political movements in modern times', one that is interested in bringing together local sustainable food production, environmental responsibility and a global network of communities. You can find out more about Geoff's work and read reviews of the book on his website. You can also hear him and the founder of Slow Food, Carlo Petrini speak on the Food Programme on BBC 4 here.

Tonight I'm putting on my dancing shoes and heading out to the Green Note Cafe to see PALINKA, a group of all female musicians who bring together Hungarian, Romanian, and Gipsy music from villages in Transylvania. Studying music amongst village communities in the region, the band decided to name itself after Palinka, a traditional type of Brandy made of 100% fruit. Apparently in the 14th century the drink was used in Hungary as medicine to cure ills, and it is the band's favourite spirit! If you'd like to get a taste of the band's music and learn more about the members, PALINKA have a fantastic website. Their show at Green Note starts at 9p.m. but doors open at 7p.m. Tickets are £7 in advance or £9 at the door. 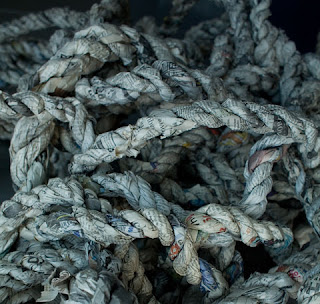 Have you ever thought of making something out of all those free newspapers you see scattered on the high street? Or using materials such as wax, rope and magazines to make a political statement about consumerism and environmental neglect? This is what Nigerian artist Nnenna Okore does, and I've decided to become inspired by going to the October Gallery to see her exhibition entitled Ulukububa-Infinite Flow. Influenced by her upbringing in Nigeria, Nnenna Okore looks at how discarded objects and materials can be reshaped/reused to create cultural spaces which get the viewer to reflect on their own exploration with their environment. You can find out more about her work and on the current themes of exploration in her art on her website. The exhibition at the October Gallery runs until November 29th. There are only a few more days before the exhibition closes, so I am hurrying down to the British Museum to see the special Hadrian Empire and Conflict event. Displaying objects from 28 museums worldwide, the exhibition explores the life and historical period of one of the most influential emperors that ruled the Roman Empire from AD117-138. There are some fascinating details in the exhibit, including the emperor's interests in architecture and Greek culture. His architectural innovations such as the Pantheon, have inspired religious and other buildings around the world. The exhibition is open daily from 10:00 a.m. to 5:30p.m. but it is best to book tickets in advance. Tickets are £12 for adults, and £10 for children 16-18, those under 16 can enter with an adult for free. You can book your tickets online here.

Anthropologists have been interested in material culture, clothing and fashion for decades. In deciding which clothes to buy and wear, people often make socio-economic, and political decisions, as well as, engage in expressing their identities and/or belonging to a particular group. If you are anything like me, your workout at the gym involves wearing old t-shirts and shorts you've had for years. But what if you did wear trendy clothes running and your sportswear suddenly became high fashion? A new exhibition at the V & A Museum called Fashion V Sport explores the complexities and tensions between the worlds of sport and fashion. The exhibit is split into 4 sections: Dare, Display, Play and Desire, with each section exploring a different aspect of the interplay between the two industries. Tickets are £5.90 for adults and £3.90 concessions. Advanced booking is recommended. Tickets can be purchased online here.

I've decided to prepare myself ahead of time for the University of Cambridge's first ever Festival of Ideas which begins tomorrow. The festival has over 200 events aimed at celebrating the humanities, arts, and social sciences. Quite a few museums, educational and community groups are involved in offering various events. Some of the sessions I find particularly interesting are workshops on everyday life in Mongolia and Tibet, and Arabic calligraphy, as well as evening talks on topics such as Facebook, friendship and social interaction. You can download the full list of events on the Festival's webpage. Most of the events are free and open to all ages, but some sessions require booking. For an interesting review of the festival check out this online article on BBC. 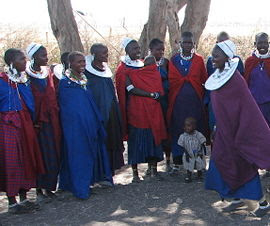 Today I'm going to go to the School of Oriental and African Studies' Kalili Theatre for my lunch break (1:00- 3:00 p.m.) to watch the film Masai Women produced in 1974 as part of Granada TV's 'Disappearing World' Series. In the film, director Christopher Curling and anthropologist Melissa Llewelyn-Davies, explore certain rituals and processes in the lives of certain Masai women which act as rites of passage from girlhood to womanhood. The film is possibly one of the most admired and most viewed of the 'Disappearing World' series and has been praised for its skill and sensitivity in allowing insights into the world of Masai women. The film however, still generates arguments about how it handled sensitive subjects such as circumcision ceremonies. For more information about the 'Disappearing World' series you can email the Royal Anthropological Institute's film officer at: film@therai.org.uk