Hey Everyone, I mentioned the first one of these tasters being run over the weekend. They are being held over consecutive Sundays 15th, 22nd and 29th May and cost £35. All enquiries, including for bookings, should be directed to Yasmin Hales-Henao on Email: yhales @aol.com : : 07974-389188.

On the 15th May, the multilayered meaning of home is explored using a range of comparative ethnographic examples and looks at the social use of domestic space, decorative style and meaning of the home in Britain from the 19th century to the present day. This is then related to the way spatial practises, rituals, boundaries and cultural identity differ in the traditional and modern Japanese home, taking in a visit to the Geffrye Museum’s current exhibition  "At Home in Japan”, previously described on the blog. 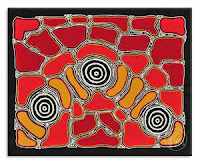 The second, on 22nd May, concerns decoration in societies. Looking at decorative expression on walls, floors, landscape and the body in South and South East Asian indigenous art practises, their cultural meanings and the relationship of these aesthetics to wider society. Also, how indigenous group practices adapt and make the transition from tradition to modernity. This will be considered through theoretical discussion, ethnographic film, photography, and a visit to an art exhibition.

Finally, the third taster, on the 29th May, will consider the role of dirt, gaining insight into the cross cultural attitudes to ideas of purity and pollution and the Anthropology of Dirt itself. This view takes in obsessions with hygiene, food, the body or the practise of everyday life, and consider through discussion why the boundaries between cleanliness, dirt and disgust differ across societies. This session will visit the “Dirt: The Filthy Reality of Everyday Life” exhibition previously described at the Wellcome Trust Collection.

Each of these tasters is followed by an 8-week course run by Yasmin from June, more details of which can be gained from her on the above contact information.

All taster days run from 10-4pm, location be confirmed with Yasmin.