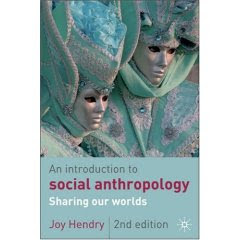 Tonight I'm going along to an event at the Blackwell's University bookshop in Oxford Brookes University. It's the launch of a new guide to social anthropology called 'An Introduction to Social Anthropology: Sharing our Worlds' which is one of variety of books out there that's useful for newcomers to the subject. Interestingly, sections of the text are written by indigenous people themselves, so we get a first-hand account of their concerns and beliefs. The author and anthropologist, Joy Hendry ( A Japan specialist) will also be on hand to talk about the book. If you want to find out more about her in advance you could listen to an episode of Radio 4's Excess Baggage that she appeared on last year, talking about the experience of conducting fieldwork. The book launch begins at 17.00 and the shop is located on Gipsy Lane in the Headington area of Oxford - to attend you will need to contact jhendry@brookes.ac.uk. 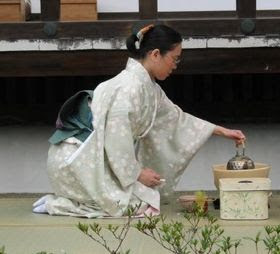 I'm winding down the week at the British Museum and settling in for a good ole cuppa...Japanese style. There's the opportunity to experience the whys and wherefores of the historical, but still very culturally important, Japanese tea ceremony at both 13.30 and 15.00. Funnily enough, Joy Hendry (see Thursday's event) has written a little about the role of the tea ceremony in Japanese society. There are also a number of other interesting articles online that analyse the ceremony, so you can be fully clued up before going along. The event is FREE and you can just drop in.

SATURDAY 12TH APRIL - Tuning in to the resistance 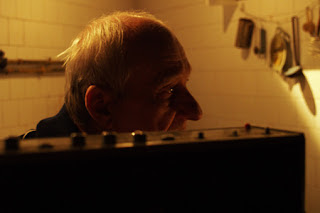 Hold me in your arms, don't let me go, I want to stay forever. You might think 'Home and Away' is a film festival celebrating the best ever episodes of the antipodean soap opera. It's not - instead, much more intriguingly, it's a celebration of Romanian film including documentaries that explore issues at the core of anthropology's concerns. Tonight I'm off to watch Cold Waves, about a radio station which acted as a centrepiece of the resistance against Communist state abuse. It was made by an award-winning director who is credited with bringing documentary a new-found respect in Romania - for years it was seen only as a propaganda tool for the government. This tension between the use and abuse of media, and how society is represented on film, is a key consideration in visual anthropology, so the film should be well-worth watching. It begins at 20.30 at the Curzon Mayfair in London and you can book online here; tickets cost £12.


SUNDAY 13TH APRIL - Who will have the last laugh?! 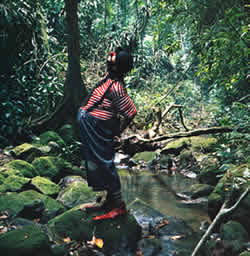 Today sees the punchline session - i.e. the last day's viewing - of an exhibition that's been running at the Hayward Gallery in on the South Bank in London for the last month or so - 'Laughing in a Foreign Language'. The collection includes photography, film and interactive installations that all explore the cross-cultural nature of humour and ask whether jokes can be appreciated by people from diverse cultural backgrounds. It is a section of anthropology that has received relatively little coverage over the years, although this book was written on the subject, so maybe going along might provide the inspiration to set up your very own sub-field of anthropology. Tickets are priced at £5.50 for students and the exhibition is open between 10.00 and 18.00 - you can book online here.

On Monday I want to head down to a film that's on at SOAS in Central London called Dolce Vita Africana. It charts the life, times and pictures of Malian photographer Malick Sidibe. From the 1950s through until the 1970s he caught a generation of young Malians on film celebrating their independence from colonial rule, and then falling under a brutal dictatorship. The film claims to be not only about Sidibe's art, but also about how culture is reflected through the lens - a key consideration of visual anthropologists. The showing has been arranged by Friends of Mali in the UK, and is followed by a Q&A with the director. It begins at 19.00 in the Khalili Theatre, and entrance is FREE. 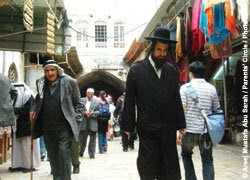 Studying cross-cultural comparison and communication is something that anthropologists frequently get up to, which is why the new exhibition by campaigning organisation PhotoVoice should be a good one to attend. 'Side by Side' is a collection of photographs produced by young Israelis and Palestinians who have lost family members in the conflict. The aim of the project was to create a form of visual 'dialogue' between the two groups so that the teenagers would understand each other's point of view at a greater depth. Projects like these often involve anthropologists because of their experience in putting across alternative points of view. The exhibition is being held at The Economist Plaza in Central London until May 1st (open 10.00 until 18.00) and admission is FREE - you can read more about it in an article here. 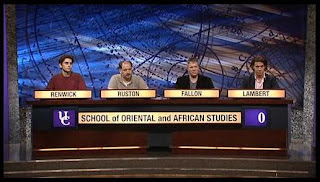 University Open Days are often the best opportunity to find out about the variety of different courses on offer at a college - you can talk to academics, current students and admissions tutors. Today, I'll be back down at the School of Oriental and African Studies, or SOAS, in London to look into their anthropology options, which include specialisms in the anthropology of food, development, media and migration - you can find out more about ALL the modules available here. The open day runs from 11.00 until 17.00 in the Brunei Gallery and includes a tour of the campus. To book a place, call the admissions office on 020 7898 4034 or email study@soas.ac.uk
Posted by Lucy at Wednesday, April 09, 2008