THURSDAY MAY 15TH - Saving the Forest 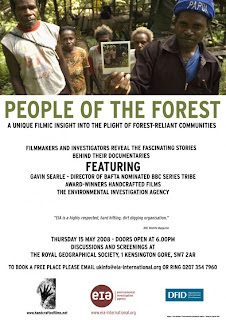 This evening I'm going to a film screening at the Royal Geographical Society, where a new film called 'People of the Forest' is showing. It looks at the campaigns by a forest-reliant Indonesian community to salvage their land from the attentions of illegal logging companies. The film is directed by Gavin Searle, who was responsible for much of the recent television series Tribe which looked at indigenous communities around the world, and was made with the advice (and criticism!) of anthropologists. Gavin also studied visual anthropology at the Granada Centre in Manchester. This film was made in collaboration with the activist organisation 'Environmental Investigation Agency', who will also be on hand to answer any questions about the subject. It begins at 18.00 in the RGS and admission is FREE, though you should contact the organisers beforehand on ukinfo@eia-international.org or by ringing 0207 354 7960. 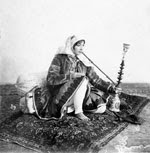 On Friday I'm heading back to my spiritual home - the Pitt-Rivers Museum in Oxford - for a dose of their latest exhibition of photographic prints from Persia taken at the end of the 1800's. Taken by Antoin Sevruguin, they offer a rarely-seen insight into life in and around Tehran at that time. As you can read in this book about the man, he aimed to produce a photographic inventory of the people of the region. This is, therefore, an invaluable resource to academics - although anthropologists might questions the extent to which it is possible to represent a people merely through a visual catalogue! If you stick around in Oxford, you might also fancy going to their latest night of 'light and sound'. On Saturday evening you can explore the museum's anthropological collections by torch light for FREE.

This weekend I'm heading to the October Gallery in Central London for the Angaza Africa exhibition, showcasing the work of 12 African artists as representative of contemporary African art. This afternoon at 15.00 there's also a talk by the editor of a book about the collection, Chris Spring (also curator of the Africa Galleries at The British Museum), who will be discussing the work with some of the artists. And following Chris at 16.30 will be a screening of 'This is My Africa' - a film that gives voice to a selection of people who have lived, worked or traveled in Africa. You can book ahead for both events by contacting rosalind@octobergallery.co.uk or telephoning 0207 242 7367. The exhibition as a whole is open Tuesday to Saturday until 17.30 and runs until the end of June - admission is FREE.

This afternoon I'm off to the second installment of what promises to be a great series of documentary film highlights from the recent London International Documentary Festival, which has a strong anthropological leaning. The first film showing today is Fighting the Silence, about the horrific episodes of rape that occurred during the Congolese civil war. It is followed in Session 2 by three shorter films, including 'Possessed' made by director Martin Hampton as part of his MA in Visual Anthropology at Goldsmiths College. The whole event lasts from 15.00 until 18.30, at the Roxy Bar & Screen near London Bridge, and tickets cost £3 for which you can stay as long as you like. If you are unable to make it, you can still view films from other students on the MA, on the Goldsmiths webpage here.


MONDAY MAY 19TH - Dreaming of art

Storytelling is an integral part of almost every society on earth, so the new exhibition at Art-Space Gallery in Mayfair should be a fascinating one. It is a collection of paintings by some of Australia's foremost indigenous artists, and

is being put on in association with the Muk Muk Aboriginal Art organisation from down under. The paintings celebrate the Aborigine craft of storytelling, which has been studied by many an anthropologist - you might want to read this article for a brief introduction to the subject. The exhibition runs until the 25th May between 11.00 and 18.00, with some of the artists being available to answer questions if you're lucky enough to be there at the right time.


TUESDAY MAY 20TH - Getting up to nothing 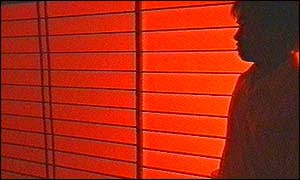 I don't feel much like going out today - it's all become a bit too much. Which is ideal in a way, because I can listen again to an episode of Thinking Allowed from last week which investigated the large number of Japanese teenagers who withdraw completely from social life and spend months on their own in their room. Called hikikomori (meaning 'being confined'), they have bemused many researchers over the years, who have attributed their reclusive behaviour to anything from hopelessness brought on by economic downturn to overbearing academic pressure. An anthropologist, James Robertson, has written a book that, in part, examines the phenomenon, and there are also a number of interesting articles on the web. No need to go out at all then.


WEDNESDAY MAY 21ST - In from the cold 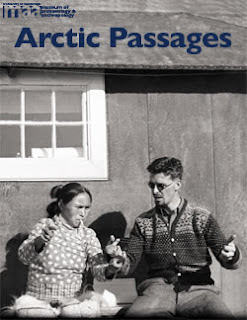 The Arctic is frequently in the news these days because of its importance in the debate over climate change, but it has long been a location for academic interest - and the exhibition I'm off to this morning seems especially relevant to today's concerns. Held in the Museum of Archaeology and Anthroplogy in Cambridge, 'Arctic Passages' follows the 1934 Wordie Arctic Expedition with a collection of visual artefacts from a Cambridge professor's trips to the region, which included extensive research the Inuit people's society and culture. There are films and photographs, as well as some of the clothing worn by the expedition participants. It is open Tuesday to Saturday from 10.30 until 16.30 and entrance is FREE.