THURSDAY 8TH NOVEMBER - Reliving the Day of the Dead 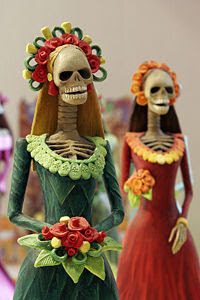 Today I'm going to listen again to the episode of Thinking Allowed from last week that featured American anthropologist Stanley Brandes talking about preparations for the Mexican ritual, The Day of the Dead. Then, you can listen to his contribution to the show from yesterday reflecting on the events. The ceremonies that take place celebrate the deceased through a series of presentations at cemeteries, and often also involve processions in costume. You can read more about the festival here, and also see some fantastic photographs here. Finally, you can also view a photographic project done by a visual anthropology student at Goldsmiths here.

Today I'm off to spend the day with Antony Gormley, the famous sculptor, who studied anthropology at university and says that the subject is often a source of inspiration in his work. You can read an article about his work by anthropologist Hugh Brody here. Today, Tate Britain have organised a studio visit to his place of work lasting from 11.00 until 19.00. It's a little pricey (£65 for students) but hopefully should be well worth it - you can book by phoning 020 7887 8888. 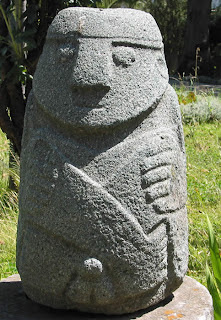 If the can't make that visit, another event worth considering is the two day symposium starting today at the Sainsbury Research Unit for the Arts of Africa, Oceania and the Americas in Norwich. Experts in anthropology and art history from all over the world will be discussing the 'embodiment' of objects - answering questions such as 'Once made, what is it that objects do?' and exploring the way different societies give meaning and life to things. Entrance to the symposium is only £10 for students and you can download an application form here. IF you do go, make sure to look around the impressive collection of art and artefacts from across the world in the centre's exhibitions. 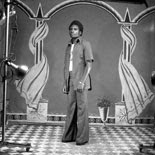 On Saturday I'm going to the Pitt-Rivers Museum in Oxford to look at the new exhibition there, 'Studio Cameroon', which comprises some of the first studio photographs taken in a Cameroonian town in the 1970s. The pictures are meant to show the changing identity and activities of the town's residents in a period of rapid urbanisation. The anthropology of photography is a wide subject of study, and discussions are often about the different way that images can represent 'reality', and how they can be of benefit (or not!) alongside more traditional forms of written research.

This Sunday I'm checking out the permanent exhibition that has just opened at London's Museum in Docklands, called London, Sugar and Slavery. Housed in a former sugar house, the collection uses films, objects and installations to uncover the hidden narratives of London's slave trade, and wants to encourage visitors to question the usual understandings of 'freedom' and 'slavery' 9such analytical skills are vital in any anthropologist's repertoire!) There are also a series of events in connection with the exhibition, including talks and film screenings. The Museum normally charges to get in, but if you go this weekend, admission is FREE.

Tonight I'm back at Pocketvisions for another film from their politics, violence and resistance season. 'The Resistance and the Test of Time' is about how the memory of events under the wartime occupation has affected subsequent French society and its Government's decisions. As I mentioned last week, resistance is an important topic in anthropology, and many academics have researched how communities attempt to create a different, bottom-up perspective from the ruling ideology of the day. The film starts at 20.00 in the Roxy Bar & Screen and entrance is FREE.

On Tuesday I'll be attending the launch of a new film by Goldsmiths University's Professor of Ethnomusicology, John Baily. For three decades he has been researching Afghan music, and Scenes of Afghan Music is about his most recent work in London's Afghan community and their musical communications with their homeland and global diaspora. The anthropology of music is a fascinating sub-topic in anthropology and can be studied at Masters level, for example the MMus in Ethnomusicology at Goldsmiths. The screening is at 17.30 in the Ian Gulland Lecture Theatre at Goldsmiths and is followed by a reception - admission is open to all and is FREE. Today I want to do a bit of research into the important branch of anthropology that is forensic anthropology. Last week I saw a short photo-essay on the subject from Guatemala, which underlined how important the work of forensic anthropologists can be. The photos depict scientists investigating human remains from the murder of indigenous people in Guatemala - their findings help influence policy and judicial process as well as providing information for families about their loved ones. You can study forensic anthropology at several places across the UK - for example at Liverpool John Moores University and Dundee University, and it has a very rewarding and interesting career path to follow.
Posted by Lucy at Wednesday, November 07, 2007