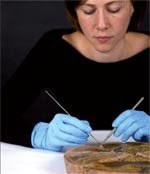 This afternoon I'll be at the British Museum listening to a talk by two anthropologists on Oceanic barkcloth. Though that may sound incredibly specialised, barkcloth is actually thought to be one of the first forms of paper, and perhaps where the material was invented (around 105AD in Fiji), as you can read here. It is also believed to have held tremendous religious and social importance, as well as being used in clothing and decoration. It's worth mentioning that the talk is being given by Lissant Bolton and Sherry Doyal, both clear and interesting speakers who have spent a large period of their careers working in these areas. The event begins at 13.15 in Room 3 of the British Museum, and is FREE. (See Monday's entry also for more info on barkcloth)

It's not often people below degree level get a chance to become involved in anthropology, so I was particularly interested in come across the film 'Anglesea Road' on youtube last week. It was made as part of visual anthropology project between the Royal Anthropological Institute and a college in South East London, where a group of 16-19 year-olds made a mini-ethnographic film about their local area, and takes a look at a street which has a large Somali population, and what the area means to them. Also part of the project was Talk of the Trade, a film about a market in Woolwich that has changed the produce it sells in keeping with the local population. Both pieces manage to tell us a lot within only a short space of time. The project is linked to the Discover Anthropology initiative, which is all about engaging young people with the subject - for more detailed information see the London Anthropology Day website. 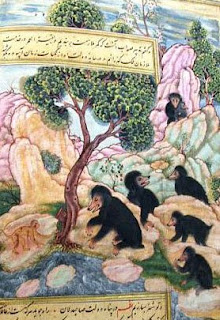 To kick off the weekend I'll be visiting a new permanent exhibition at SOAS University in London. Held in the Brunei Gallery, 'Treasures of SOAS' is a collection of some of the institution's less well-known material. It includes a copy of the Islamic manuscript, the Anvar-i Suhayli, which is a 16th century book of animal fables, as well as decorative Buddhist manuscripts and sculptures from South-East Asia; contemporary African paintings and textiles, and much more. You can view examples of some of the work on the website, and if you have the correct software view an interactive version of the Anvar-i Suhayli by following the links on the right hand side. It's also worth revisiting periodically as the content will be rotated. The Gallery is open from Tuesday to Saturday between 10.30 and 17.00 and entrance is FREE.

Last year I mentioned a film called Ten Canoes on the blog, which showed at the London Film Festival and was the result of a collaboration between a film-maker and the Aboriginal Yolngu community, from Australia. It was one of the first times a feature film had been made featuring their indigenous language, and was inspired by a series of anthropological photographs by Donald Thomson - you can watch a trailer on the website. Recently, another website - '12 Canoes', has been launched, which is a fantastic resource containing films made by Yolngu people about their life and culture, as well as information about their background and lots of accompanying photographs. There are also further interesting thoughts and links about the website on the Material Culture anthropology blog.

Another website to browse today, which aims to bring the ethnographic collections of the Royal Albert Memorial Museum in Exeter to a wider audience. It contains a number of interactive tools, including the opportunity to (electronically) have a go at playing a Burmese xylophone, or to create your own Polynesian barkcloth. The material is aimed at varying age groups, but all is very accessible and pretty varied in its subject matter. So for those of you not lucky enough to live besides the seaside in Exeter then it's well-worth a few hours of your time - you can view a list of subjects already online here. 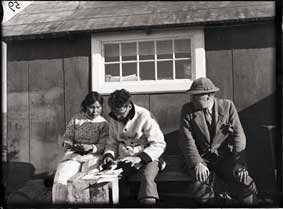 Since it's just been named as one of the top 5 museum exhibitions in the country, I thought today I would head back down to the Museum of Archaeology and Anthropology (MAA) in Cambridge for a look at their Arctic Passages collection. It explores the Wordie expeditions of the 193os, when a group of scientists went to the Arctic to conduct experiments and also to learn more about Inuit life and culture. This exhibition focuses on these interactions and how the two communities responded to each other. There is also an extensive website devoted solely to the exhibition, with some of the photos on show at the museum. The MAA is open between Tuesday and Saturday from 10.30 until 16.30 and admission is FREE - Arctic Passages runs until 2nd December.

There's a series of films being shown at the SOAS anthropology department over the coming months, highlighting some of the most well-known ethnographic films. Today sees the screening of 'Trobriand Cricket', made in 1979, which looked at how the missionary-introduced sport was adapted by locals to suit the needs of their society. You can read more about the film here. The screenings take place every Wednesday in the Khalili Theatre between 13.00 and 15.00 and are free to attend, just pick up a sticker at the main entrance. Look out for notices of other films showing over coming weeks on the blog.