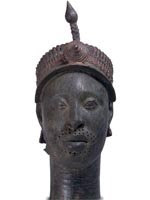 Today I'll be down at the British Museum for a screening of a short documentary about the 'Head of an Ife King', one of the most famous objects in the museum's wide-ranging ethnographic collection. It is part of a series of films about the museum's most iconic objects - this head belongs to Oni, the King of the Ife from Nigeria, supposedly the place where people descended form heaven on an iron chain to populate the world. The head would have been used in many different ceremonies - you can find out more here. The screening begins at 15.00 in the Stevenson Lecture Room and entrance is FREE - however you are advised to book ahead, which you can do online. 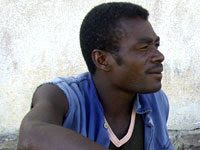 Come Friday I want to check out a new online resource which has recently been created by the 'communication' NGO Panos. They have just launched Video Voices as part of their Survival Strategies project, which presents first-hand accounts by the indigenous people of Madagascar about the ways they are dealing with environmental challenges of today in connection with their traditional cultural ways of farming. Panos, much like anthropology, aims to enable cross-cultural communication by listening to and understanding the experiences of people around the world and trying to make other people understand how and why they live like they do. There are lots of interesting resources on the website, so it's well worth a couple of hours of your time.

On last week's blog I mentioned the work of an anthropologist who has been working extensively in the development sector, looking at ways in which technology can be of benefit to the many projects therein. The author of that piece, Ken Banks, has very kindly been in touch and pointed me in the direction of another of his articles specifically on the relationship between anthropology and technology, and how he thinks it can make the world a better place. The article also includes a straightforward explanation of anthropology, which might be useful for any of you who are always getting asked exactly what it is they do!

Such are the wonders of the 'interweb', this week I'm blogging direct from the European Association of Social Anthropologists meeting in Ljublana, Slovenia. There are around 2000 anthropologists here discussing everything from spirit mediums to women's football in Romania, and from international migration to Serbian education systems. It's all based around the motto of 'experiencing diversity and mutuality' and lasts for four days. For those of you who aren't here, reports, photos and interviews will be posted on the website over the course of the conference, which should provide a fascinating insight into some of the different things anthropologists get up to and are interested in. 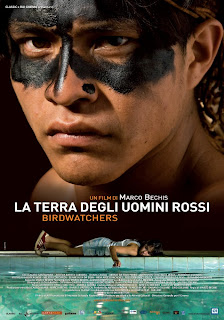 Today sees the screening of a new Italian film about an indigenous community, called 'The Birdwatchers'. The only hitch with going to watch it is that it's at the Venice film festival, but I thought it worth mentioning on the blog anyhow for the fact that many of the actors are Guarani Indians, who see the film as a way of campaigning for recognition of their land rights, which have been steadily eroded by various corporations. The film depicts the love story between a Guarani and the daughter of one of the local landowners, amid all the problems that exist in the background, including the horrifically high suicide rate amongst the Guarani. It has an excellent website, where you can watch a trailer of the film, learn more about the issues involved and also look out for news of screenings in the future a little closer to home.

TUESDAY SEPTEMBER 2ND - The race for The White House 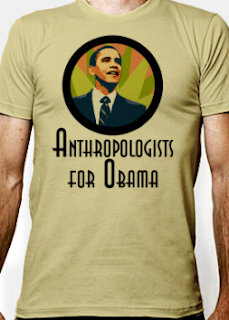 With the US Presidential race hotting up fast, I was interested to read this week that Barack Obama's mother studied anthropology at university before he was even a twinkle in his eye. Perhaps some of the wisdom of anthropologists has survived in the gene pool (biology never was my strong point) because the Presidential hopeful seems to retain a number of anthropologist supporters because of his more liberal stance than the current incumbent. In the months leading up to November watch out for studious ethnographers everywhere sporting one of these rather natty 'Anthropologists for Obama' tshirts (I'll be getting mine in pomegranate). If you're particularly keen to get involved the producers also have a blog for signed-up members and Obama aficionados - the idea being that his first-hand experience of various cultures makes him more anthropologically minded. 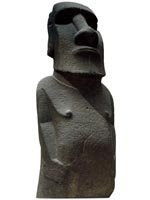 I'm back down at the British Museum today for a talk by anthropologist Lissant Bolton, who will be providing an Introduction to the Living & Dying gallery. The Gallery is a permanent collection curated by Lissant, who specialises in the Pacific, with a focus on 'gender and kastom in Vanuatu, and on the indigenous use of collections and cultural knowledge'. The exhibition looks at the ways different people around the world deal with issues of health, well-being and, on the other hand, illness and death. For a taster of what you might find there, you can view pictures of some of the objects on the website. The talk begins at 13.15 in Room 24 and last for 45 minutes - admission is FREE and you can just drop in.
Posted by Lucy at Wednesday, August 27, 2008