I'm afraid it's now too late to attend today's London Anthropology Day if you're not already registered. It includes a wide variety of talks and workshops on what it means to be an anthropologist. The day is aimed at people who are thinking of studying anthropology at university, and is FREE. If you're able to attend next year, make sure you keep checking out the website for updates. the reason I mention it today is because there is still a wealth of useful resources available on the very same website, including recommended readings for newcomers to the subject, links to university anthropology departments across the country, as well as a short film explaining precisely what anthropology is... If you haven't been able to make it today, it's still also well-worth heading down to The British Museum for its huge collection of artefacts, and specialised anthropology library. 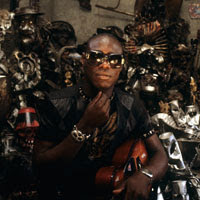 This evening I'm going along to the interestingly-named Horse Hospital in Central London for the showing of a new documentary by visual anthropologist (she did a PhD at Goldsmiths) and photographer Leah Gordon, called 'Atis-Rezistans: the Sculptors of Grand Rue'. The film focuses on a group of Haitian Vodou sculptors and their neighborhood - "materially poor but culturally rich", highlighting the links between sex, death and creativity. You can find out more about the work of the Atis-Rezistans collective on their website here, including images of their work. The film starts at 19.30, and will be introduced by the Haiti Support Group - admission is FREE. 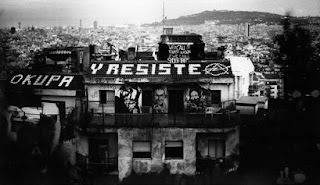 Anthropologists are often concerned with issues of property - private and public - and all the arguments in between. Sometimes 'ownership' is studied in cross-cultural terms - for example how indigenous people feel about the land they live on compared to western settlers, at other times it is framed in discussions of economic or social displacement. Today, I'm going along to a photographic exhibition in East London. 'Occupied Space' runs until the end of the weekend, and explores the experiences of those who squat 'illegally'. The website for the gallery says it is closed for the summer but I have it on good authority that the exhibition is running! Entrance is FREE.

A few months ago on the blog I mentioned a series of radio programmes being broadcast on BBC Radio about the 'everyday anthropology' organisation Massobs and their studies of Wales in the 1930s. They're being re-broadcast today - you can hear them live if you live in Wales, or for 7 days afterwards online if you live anywhere else. Also listen out for a new series starting on the 20th July. If you've got a bit of spare time and you enjoy writing you might also consider becoming one of Massobs contributors. They periodically accumulate their members' opinions and knowledge of contemporary matters as a way of preserving a record of 'the state of the nation'. Topics range from summer gardens to the smoking ban to the London bombings, and the current call-out is for thoughts on the NHS. However, be warned that in an effort to keep a balanced membership, they limit who may apply. For example, at the moment if you're a young woman from the South East you're ineligible to apply...

There's a great season of films showing this week at the Barbican for the next week or so. Cine Cuba is part of a city-wide festival of Cuban culture and art in London, and includes screenings of films that came out of the 1959 revolution. Cuba is a complicated and interesting place for many reasons, but has in fact been the subject of relatively little anthropological research, because of the difficulties of getting permission to work there. These films should therefore provide a great insight into the cultural history of the island, and perhaps the inspiration for some future anthropologists to work out there....what a hard life. One anthropologist you should look out for in talks on Cuba around town is Martin Holbraad - he's also soon to publish a book on religion in Cuba, so watch his space... 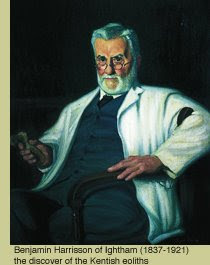 I'm heading Kent-wards today to the University's Anthropology Department in Canterbury. At the moment, there is an unusual exhibition on there all about 'the eolith controversy'. To unravel that tangle of words, 'eolith' refers to pieces of flint that have the appearance of being worked on by human hand - many similar examples of which I'm sure you will have seen in museums far and wide, as well as on the odd beach. This collection, which is also due to go on a tour of local museums, takes an anthropological look at this theory - from the point of view that these stones are quite possibly just geographical formations, and remain in museums because of the scientific 'baggage' that years of treating them as human tools entails. The exhibition is currently on the landing of the Marlowe Building, and you can read more about it here.


WEDNESDAY JULY 16TH - Getting to the point

Further developing my burgeoning obsession for flint in Kent, on Wednesday I'm going to the Quex Museum, nearish to Canterbury, to check out their collection of arrowheads. The wider museum contains weaponry from many different world cultures, and this exhibition - The Archer at Quex - is to mark the fact that the 2012 Olympian archery site will be located nearby. As well as marveling at the role arrowheads and bows have played in various different societies, the other ethnographic objects on site should make the trip worthwhile - they largely date from the 1850s-1940s and the explorations of founder Major Powell-Cotton. Entrance to the museum costs £7, or £4 for students, and it is open between Sunday and Thursday from 11.00 until 17.00.
Posted by Lucy at Wednesday, July 09, 2008